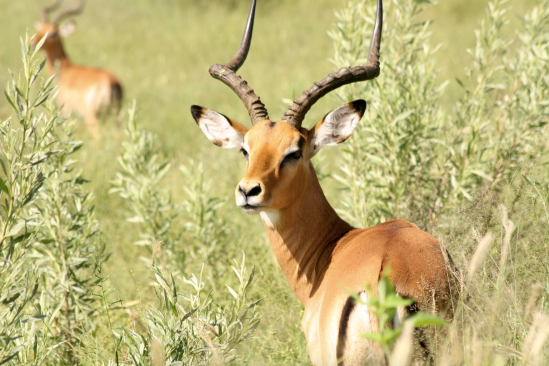 After two nights in Maun and a lot of tar road driving, it was time to hit the gravel! Here’s a quick recap of what we did in the first few days:

Moremi is a 2-3 hour drive from Maun, depending on what you see on the road and how bad the rains have affected their drivability. We started before sunrise in order to take full advantage of the park. We hit the gravel road about 30km from Maun and finally put the car in 4×4 and let air out of the tires. It felt a bit like letting our hair down and finally being really free in Botswana!

As the sun began to illuminate our surroundings, the animal crossings quickly changed from cows and donkeys to elephant and impala. Before we even arrived at the Moremi entrance gates, we saw a dozen species of mammal and hundreds of birds. We were false charged a few times by ballsy male elephants and quickly reminded of our mortality.

We entered Moremi at South Gate and were given a campsite. It was still early, not even lunch time, so we went out for a late morning drive to try our luck. It was quite hot already so the animals were mostly sleeping or hiding away; but we did see one cheetah far in a field. Unfortunately I wasn’t able to get a decent photo of her before she ducked down into her den (we think she had cubs hidden away).

We rested in the peak heat of the afternoon (and attempted and failed to do laundry with eco-friendly laundry detergent) back at camp. Around 3pm we got back into our trusty 4×4 and hit the tracks again, hoping for better wildlife viewing as the sun faded away.

Only 30% of Moremi is mainland, the rest of it is within the Okavango itself. This means that during the wet season a lot of the park is inaccessible to normal vehicles, and it’s extremely easy to get stuck in mud and water. We followed Tracks4Africa again on Ricky’s phone, practically making our own way in a few of the more confusing sections. I’ll say one thing for sure – having the souped up Ford Ranger was a major plus that day!

In the late afternoon, a brief rainstorm caught us by surprise and had me a bit nervous about the mud. As the downpour receded, a rainbow spread across the blue-grey skyline and the green grass was almost glowing. We watched hippos walking along the open grassland, feeding alongside red lechwe and tsessebe. A bit further on we stopped at a picnic site for sundowners.

We returned to camp at sundown and cooked up a lovely boerie and pasta dinner. As I was preparing the veggies, a noise from the nearby bush startled me. I looked up with my headlamp to see a full-grown civet walking through our camp. She paused to look in my direction then slowly wandered past me, sniffing some of our gear and looking through the bushes. She was in no hurry, but I was so surprised I didn’t have time to grab my camera. I called Ricky over and we watched her disappear into the woods. What a cool experience!

We slept very well for our first night in an unfenced campsite. Besides the civet, who unfortunately didn’t return that evening, we had few visitors to our camp. In the morning, the only spore we found were from antelope – most likely impala – who had walked across our camp and through the rest of the campsite.

It was to be a day of game parks; we drove from Southgate in Moremi up to the northwest corner of the park and exited through Khwai gate. Our destination was Chobe National Park, in particular Savuti camp, which had an excellent reputation for wildlife sightings (in particular lion!).

Throughout our entire two week journey, we had only one problematic water crossing, and it happened just outside of Moremi. We had just crossed over the bridge from Khwai and gone about 10km further, when we came to an impossible looking water crossing. Ricky had to wade into the water, while I watched for crocs, to see if it was passable. It wasn’t. In almost all situations like this, the best option is to go back to camp and ask for help.

Looking at the map, there didn’t seem to be an alternative route anywhere nearby! As we sat and considered our next move, a large game vehicle drove up behind us. They offered to guide us to an alternate way around, and we followed them through a muddy, narrow and winding track by the river. Eventually we came to a crossing point, where there was a tree growing from what looked like a river. I was nervous (I was driving!), but Ricky helped guide me and we followed the game vehicle through the river. We made it out unscathed (or at least the Ford kept on driving)!

After our nerve-racking water crossing, the rest of the drive was quite tame. Mostly deep sandy track and quite slow, but a lot less threatening than croc-infested waters. We passed a gentleman driving back towards Maun who told us about mating lions and wild dog near Savuti, driving up our excitement as we got closer to camp.

We arrived in Chobe in the early afternoon and visited our campsite. I attempted and failed again to effectively wash our laundry, deciding we would need to buy not-so-eco-friendly stuff at the next chance, while the mid-afternoon sun baked down. Once it seemed cool enough, we hopped into our 4×4 to search for lion. Side note: we decided to nickname our 4×4 Blake, aka Buh-lah-kay. If you don’t know the reference, please take some time to watch this Key & Peele episode. You’ll be glad you did!

Back to the story. We drove the many winding roads of Savuti in search of mating lions. We could hear them, but not see them. In the meantime, however, we saw two pairs of animals that excited me – black-backed jackal and bat-eared fox – both in the wide open, relaxing with their mates before an evening hunt.

After we spent some time photographing each pair, we drove on to a nice sundowners spot near a hippo pool. There, we were told of the lions’ location by another visitor. Excited to hear they were close by, we quickly drove in their direction.

It didn’t take long to find the lions – there were already a few game vehicles crowded nearby. We managed to get a good view of the mating pair, who would likely continue their efforts 4-6 times an hour for days! It was difficult to get a good photo of the pair, but we did manage to get some footage of one of the other pride members who had recently gorged himself on a zebra carcass. 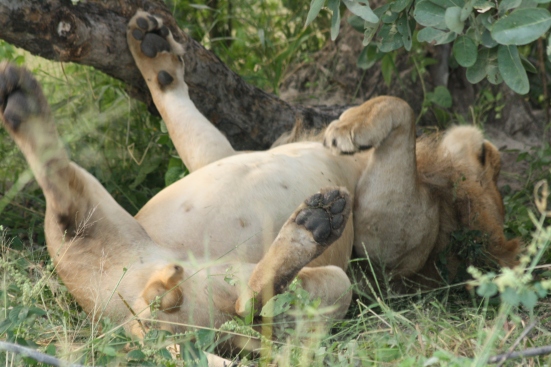 It was a successful day in Chobe National Park! We loved the campsite, quite wide open and wild. In fact, as the crow flies, we were probably less than a kilometre away from the mating lions as we slept that night…

Thank you for visiting my site! I’m so honored to have you here. Please leave me a message or comment if you’re keen to stay in touch.

My name is Annie, I’m an American expat living in South Africa with my husband. Welcome to my site! Read more →